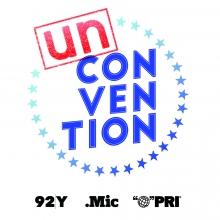 New York, NY – August 10, 2016:  Now that the major party conventions have ended and the campaigns are in full swing, 92nd Street Y (92Y), Mic and Public Radio International (PRI) are joining forces to create The UnConvention: an ambitious multiplatform initiative to engage millennials in meaningful civic conversations during this year’s election season.

Now the largest living U.S. generation, millennials have the potential to make a huge impact in 2016. But, for this generation that defies convention and demands transparency, politics-as-usual with its increasingly divisive dialogue and polarized two-party system holds little appeal. Blending broadcast and social media, interactive polling, live events and community meet-ups, The UnConvention is a 21st-century public square aimed at illuminating millennials’ most important issues, amplifying their ideas, and galvanizing them through an interactive dialogue.

The UnConvention includes streams of social, digital, audio and video content created and shared by 92Y, Mic, PRI and others wanting to join the conversation.  The UnConvention kicks off with a large-scale social participation campaign and insights initiative that uses the power of Facebook to share and analyze weekly interactive quizzes and polls on Facebook led by PRI and aimed at uncovering what millennials care about most as Election Day approaches.  PRI will use the data generated to fuel its online and broadcast reporting, podcasts, and infographics as part of its extensive, ongoing election coverage. PRI and 92Y are collaborating to produce the poll and quiz tools with Telescope, a technology company that powers real-time participation and social experiences for some of the world's largest entertainment and consumer brands, including NBC's “The Voice,” ABC’s “Dancing with the Stars,” CNN, NASA, and the NBA.  The tools are designed to allow users around the world to easily join a global discussion about the U.S. election, participate in surveys on the key issues and explain their responses in text and video. Fun, interesting quizzes will test knowledge of the candidates’ positions and deliver a score they can share with friends.

As the election nears, the effort will feature an unprecedented “World Vote” on Facebook, where millennials around the world will state their choice for the next President of the United States and be part of a worldwide conversation about the meaning of the 2016 U.S. election to young people across the globe.

The initiative culminates October 17-21, in five nights of high-profile discussions and performances taking place at 92Y and co-presented with other venues in New York, including The Greene Space, National September 11 Memorial & Museum and Housing Works Bookstore Café. Throughout September and October, The UnConvention will also provide content, tools and resources to support the creation of satellite events and community meet-ups at cultural institutions, community centers, universities and colleges around the country.

The UnConvention partnership brings together a unique set of perspectives from 92Y,
an unparalleled community and cultural institution known for bringing the world’s thought leaders together for conversation and debate; Mic, the leading voice of millennials across the country; and Public Radio International (PRI), a global leader on news, issues and cultures that inform and empower people to improve their lives and the world.

As a center for the arts and innovation and a convener of ideas, 92Y is creating initiatives like The UnConvention to reimagine community for the digital age and renew the organization’s core values – like civic responsibility and open dialogue – for the next generation. “92Y has always been committed to supporting an informed citizenry, and our challenge today is that young people are not content to receive information passively; they want to be active participants in the conversation, and they want to be heard,” said Asha Curran, 92Y’s chief innovation officer and director of the Belfer Center for Innovation and Social Impact at 92Y. “In developing the concept for The UnConvention, we knew that influential, thoughtful content and distribution partners would be critical to its success, and we are so pleased to be launching this initiative with these partners.”

Mic will bring its unique perspective on young people to The UnConvention through its original editorial and video, broadcasting the events and exclusive behind-the-scenes interviews and footage on Facebook Live throughout the week. Mic’s reporters, millennials themselves, will be actively covering the week and sharing their insights on the issues that matter most to this very important generation.

“As the leading voice of millennials in the country, we are thrilled to be a partner in The UnConvention, working to educate and raise awareness around the issues that will define our generation’s present and future selves,” said Cory Haik, chief strategy officer, Mic. “Mic worked with our partners to program The UnConvention through lens of young people, spotlighting such issues as social justice, immigration reform, gun control, and beyond. We know this very powerful demographic has the potential to make a big impact in this campaign and The UnConvention is a step in getting us there.”

PRI will leverage its position as a leading creator of audio and digital content to explore election themes identified by millennials as key to their decision making during the election cycle. Reports and interviews will be presented on PRI’s The World® and The Takeaway (a co-production with WNYC), and The UnConvention multi-media, text, and interactive features will be regularly published on PRI.org. “Millennials make up a significant proportion of our digital audience on mobile web and podcasts, and our mission is closely aligned with this generation’s view of themselves as global citizens,” said Alisa Miller, President and CEO of PRI. “Based on sheer numbers, millennials could be the country’s biggest voting bloc, profoundly shaping policy priorities as we head into the fall. We are thrilled to be partnering with a group of organizations who are all leaders in their fields to engage and activate this increasingly influential constituency.”

About 92nd Street Y (92Y)
92Y is a center for the arts and innovation, a convener of ideas, and an incubator for creativity. Founded in 1874, it seeks to create, provide and disseminate programs of distinction that foster the physical and mental growth of people throughout their lives. 92Y offers thousands of programs from its New York headquarters and creates community far beyond its four walls, bringing people from all over the world together through innovations like the award-winning #GivingTuesday and the Social Good Summit. It is transforming the way people share ideas and translate them into action all over the world.  All of 92Y’s programming is built on a foundation of Jewish values, including the capacity of civil dialogue to change minds; the potential of education and the arts to change lives; and a commitment to welcoming and serving people of all ages, races, religions and ethnicities.

About Mic
Mic exists to help young people make sense of a rapidly changing world. A premium news and media company built by and for the digital generation, Mic informs and entertains its audience with original reporting, perspective and video on the issues that will define the future. Mic reaches more than half of all college-educated millennials in the U.S. and 30 million people around the world each month.

About PRI
PRI is building a more informed, empathetic, and connected society by creating multi-platform content that empowers people to benefit their lives and the world. PRI’s award winning content reaches more than 18 million people each month, through over 900 public radio stations in the U.S. and PRI.org, and millions more through podcasts and social media. An affiliated company of WGBH, PRI produces PRI’s The World®, The Takeaway (a co-production with WNYC), and Studio 360® from PRI and WNYC. It produces in-depth reporting on topics including gender equity (Across Women’s Lives), international security, and American identity and immigrant life (GlobalNation). It represents public radio programs including Science Friday, q from the CBC and The Tavis Smiley Show. Major philanthropic supporters include The Bill & Melinda Gates Foundation, The Corporation for Public Broadcasting, The Ford Foundation, The Henry Luce Foundation, The John D. and Catherine T. MacArthur Foundation, and the Annenberg Foundation.