As the dust from Super Tuesday settles and reality sets in, Americans can begin to look at the presidential candidates and their chances for the nomination with clear eyes. No longer are pundits, campaigns, and voters forced to rely on the hypothetical polling data. We now have concrete numbers from actual votes that were cast in 30 percent of states.

Farai Chideya, a senior writer for FiveThirtyEight and author of "The Episodic Career," walks us through the results of Super Tuesday, and explains the nuances in the numbers.

As all of the Super Tuesday votes are counted, Dante Chinni, director of the American Communities Project, is watching how different kinds of communities vote — big cities, exurbs and the African American South.

By looking at how the votes fall into the 15 types of counties defined by the American Communities Project, we get a sense of how the vote is shaking out demographically and look for insights into what we might see in future primaries and the general election. Those 15 types, based on a cluster analysis of a range of different factors can be seen on the map below.

WNYC has tweeted election results by community type, based on the votes by counties from each state (except Alaska, Minnesota and Wyoming, where caucus results aren't available by county). Check out the results below, and listen to Dante's explination of the results.

The Big Cities and Urban Suburbs: Polling data suggested that these counties in and around big metro areas should be good for Republican establishment candidates and Tuesday is the first time they made an appearance in a big way in the nominating fight. There are many Big Cities in Texas, and Sen. Ted Cruz may have had a home field advantage there. 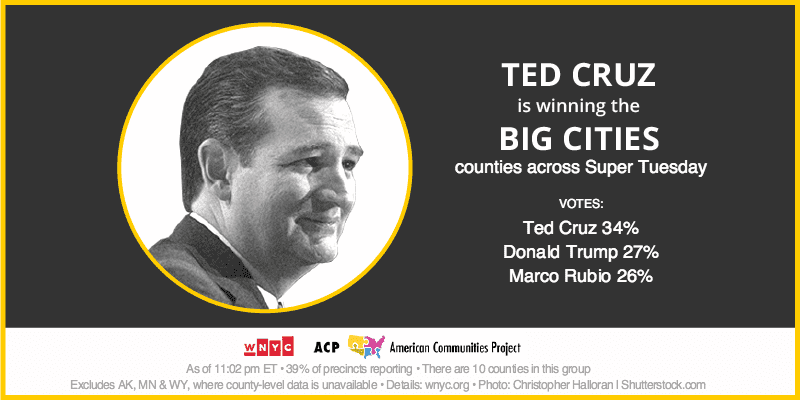 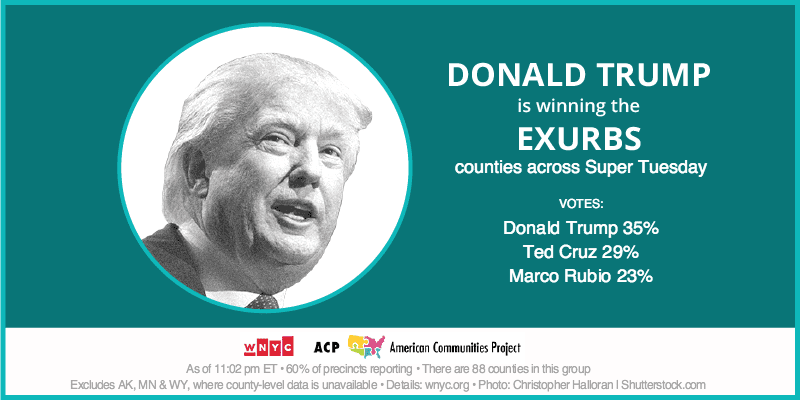 The African American South: One of the more interesting findings in the Republican votes so far has been Donald Trump’s strength in communities with large minority populations. It drove his big win in South Carolina. There are a lot of these counties in the south. Trump is running strong in these counties again: 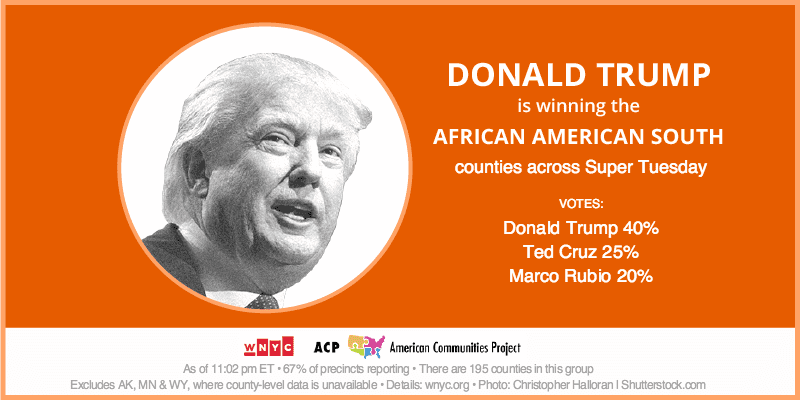 One big question was whether Trump’s pull in diverse communities extends to the Hispanic Centers in Texas, but Cruz’s home field advantage may have helped him there, as well — Cruz is leading Trump in this community type. 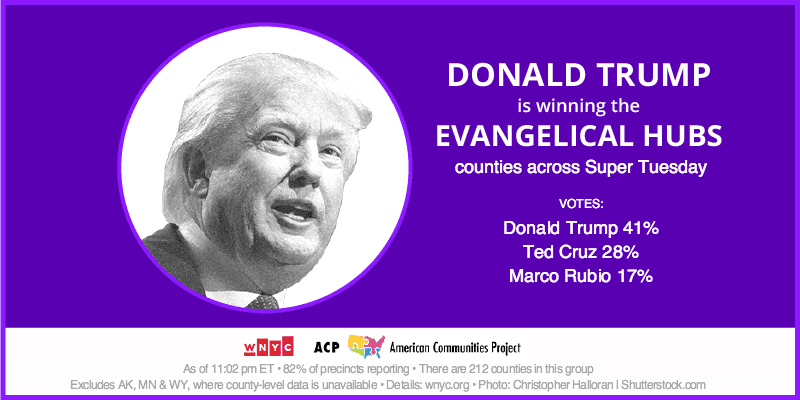 The Big Cities and Urban Suburbs: Polling data suggest this is good territory for former Secretary of State Hillary Clinton, and that proved to be true. The diverse racial and ethnic makeup of these communities seems to be in Clinton’s favor. 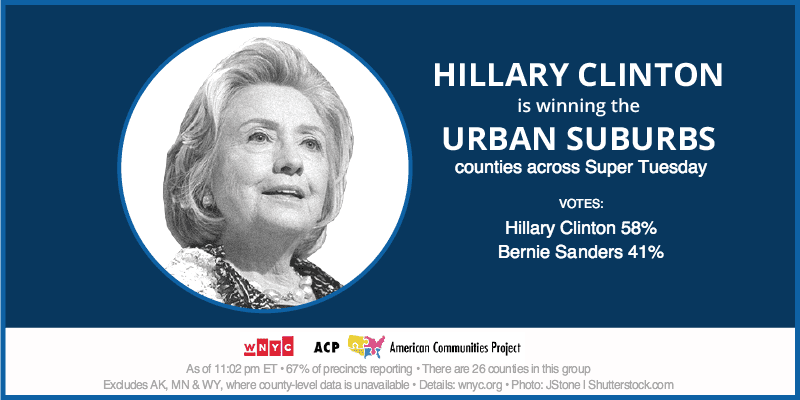 The College Towns: Throughout his run for the nomination, Vermont Sen. Bernie Sanders has leaned heavily on younger voters and college students. College Town counties brought him to within a hair of winning in Iowa and he over performed in those counties in New Hampshire. He led them decisively on Super Tuesday. 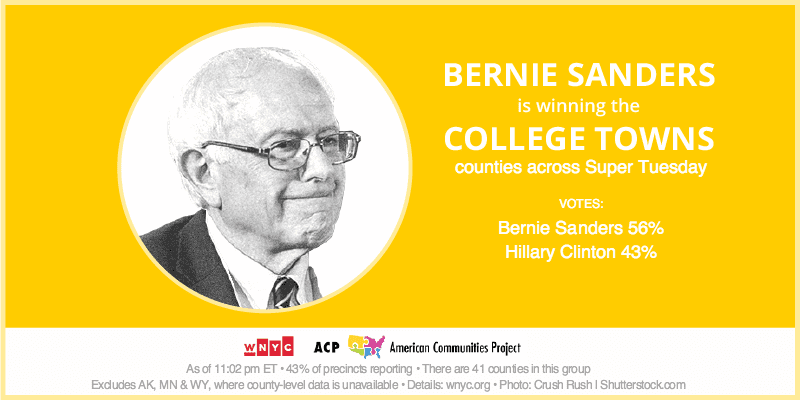 The African American South: Scattered through the south, these counties are Clinton’s biggest strength if South Carolina is any measure. This weekend she won every county in that state, but these counties gave her more than 80 percent of their vote in some cases. Large swaths of Alabama, Arkansas, Georgia and Virginia fall into this county type, which is a big reason she led by large margins. 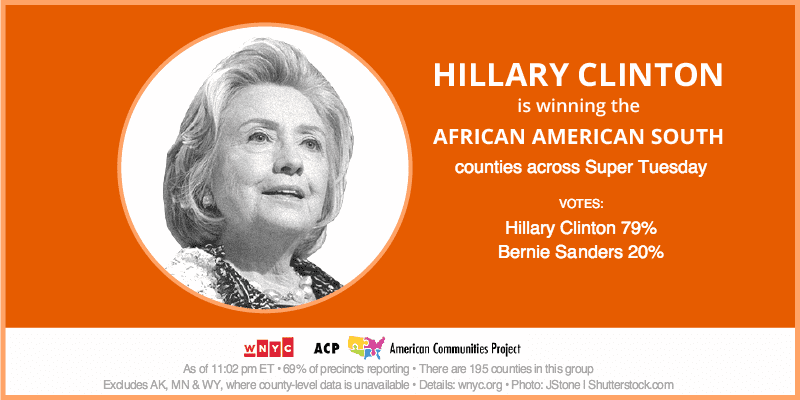 The Hispanic Centers: Primarily based in Texas, with some in Colorado, these counties should help answer a question about Hispanic voters. Exit polls for the Nevada Caucus said Sanders won Latino voters in that state, but results suggested those polls were incorrect. Clinton had a huge lead in Hispanic Centers Super Tuesday, suggesting the Nevada numbers for Sanders were outliers, at the very least.