On any given day, upwards of 80,000 inmates in America are held in some form of solitary confinement. These individuals pass their days inside four concrete walls, and with no human connection, letters often serve as the only way to reach outside the absolute isolation of their cells.

In 2009, James Ridgeway and Jean Casella, co-directors of Solitary Watch, began to contact inmates in solitary confinement through the mail.

While letters trickled in at first, James now receives so many that it's impossible to go through them all in a single week. Nonetheless, he answers each one, often with something as simple as a postcard with a picture on it.

Below is an excerpt from a letter by William Blake, who is currently in his 27th year of solitary confinement in New York's Special Housing Unit, SHU for short.

"I’ve experienced times so difficult and felt boredom and loneliness to such a degree that it seemed to be a physical thing inside—so thick it felt like it was choking me, trying to squeeze the sanity from my mind, the spirit from my soul, and the life from my body. I’ve seen and felt hope becoming like a foggy ephemeral thing, hard to get ahold of, even harder to keep ahold of as the years and then decades disappeared while I stayed trapped in the emptiness of the SHU world....

The box is a place like no other place on planet Earth....Had I known in 1987 that I would spend the next quarter-century in solitary confinement, I would have certainly killed myself. Dying couldn’t take but a short time if you or the State were to kill me; in SHU I have died a thousand internal deaths. I have served a sentence worse than death."

More of the letters can be found online at Voices from Solitary.

James and Jean, along with Sarah Shourd, published a book this month, "Hell is a Very Small Place: Voices from Solitary Confinement." They discuss the book, and the work they're doing with inmates. 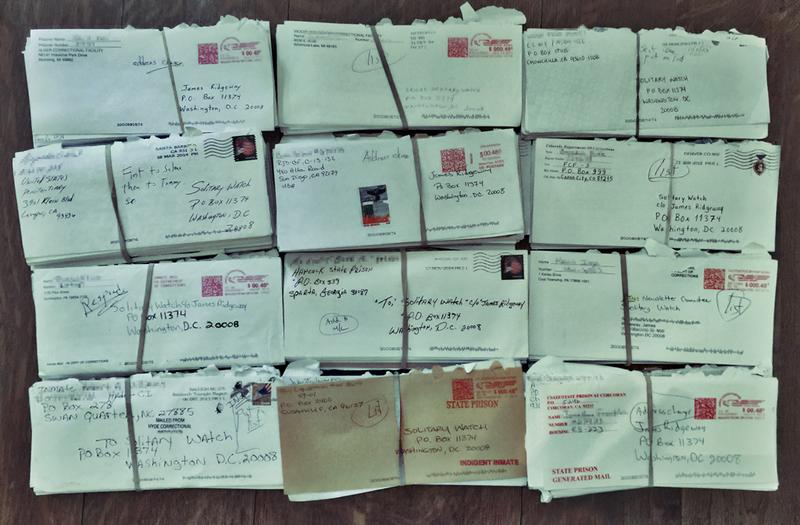 Letters received by Solitary Watch in the fall of 2014.
(Jean Casella / James Ridgeway)