The New Hampshire primaries has drawn renewed attention to the vast heroin addiction that has swept not just the Granite State, but the entire country.

Heroin addiction is nothing new, but the recent shift from the inner city to suburbia and rural America has drawn not only attention in an election year, but criticism that the crisis was ignored when it was an "urban" problem. The epidemic, once labeled a "War on Drugs," is now deemed a public health crisis, something that's brought a new emphasis on treatment and prevention versus enforcement and incarceration.

Criticism notwithstanding, heroin overdoses have killed more than 10,000 people nationwide in 2015, and the current crises is drawing new scrutiny toward opioid prescription use. Now policy makers, medical providers, and politicians are urgently looking for new answers to tackle a growing problem.

On Tuesday, the Director of National Drug Control Policy, Michael Botticelli, announced an increase of nearly $1.1 billion for prevention and treatment in combating the prescription opioid and heroin use epidemic.

What changes in U.S. policy can help contain the heroin crisis? For answers, we turn to Mark Kleiman, a professor of public policy and director of the Crime Reduction and Justice Initiative at New York University’s Marron Institute. He is also editor of the Journal of Drug Policy Analysis.

What you'll learn from this segment: 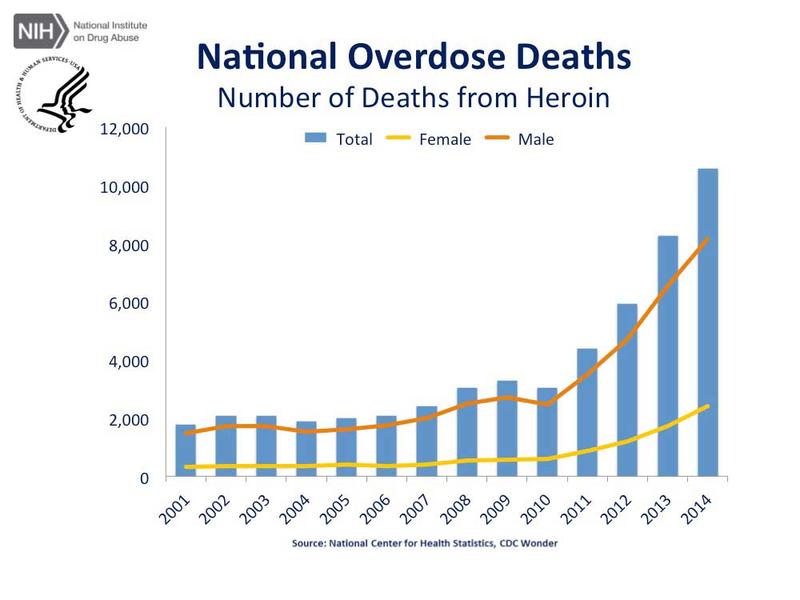 The figure above is a bar chart showing the total number of U.S. overdose deaths involving heroin from 2001 to 2014.
(National Institute on Drug Abuse)